I called it first. No one else can have it.

I am constantly amazed by the things that my nieces and nephew say. How funny they are and at the same time how smart they are. Kids are just so much smarter now. Much smarter than I ever was.

They all love to ride in my car. Maybe because it's called the Bunny Mobile as my license plate says "Bunnyvill." All three pile into the back seat, buckle up and the Bunny Mobile as we are cleared for take off. It's normal for the three of them to just start singing. They actually sing really well. They sing Disney tunes that they like. They sing Country songs that their dad likes, and they sing songs by Jason Mraz that my sister likes.

On this particular visit however, their songs were frequently interrrupted by, "I like that house, that car, that dog, that book, etc." Followed by, "I called it first. No one else can have it."  What was amazing to me, besides the fact they are total house gawkers like I am, and I wish I would have called a couple of houses first, is that when someone shouted, "I called it first. No one else can have it," that it was as if a law had been passed. There was an understanding to the others, who were not so quick to say it, that they could not have it. Not now, not tomorrow, not ever. It was done. Of course, it doesn't mean that there wasn't occassion for them to complain to my sister and say "how come she always get's the best and he always calls that first and no fair!" when it was something really great, like the giant beach house for sale! 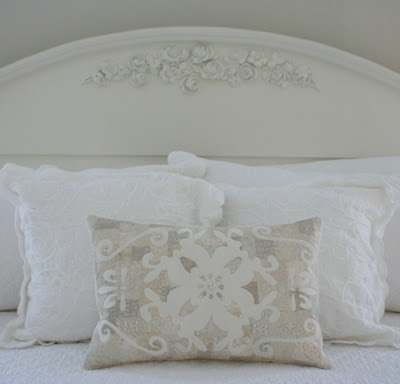 It got me thinking about things I buy and the art I make. While I do love TJ Maxx, Tuesday Morning, Pottery Barn, etc. There are times when I want the only one. I want the original and I don't want anyone else to have it. Nor do I want to know that 3 million people might have the same thing! Sometimes I really just want to buy from the artist and enjoy whatever creation they made that speaks to me. To hold onto something that is a treasure because I can't just go get another one. 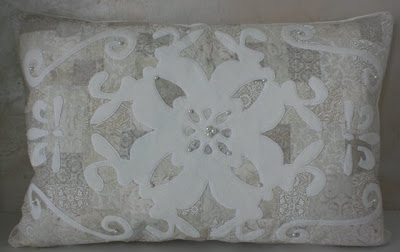 So, in addition to my stitchery patterns and supplies that I sell, I am also going to sell some original things that I just had a "Wild Hare" to make. I will sell them on my website under that category. This pillow is my first piece. It's called, Rococo Rabbits. The background is a fused, fabric mosaic that has been quilted. There are some raw edges and I like the contrast of those edges against the smooth finished edges of the rabbits (can you see them). The rabbits and scroll work is white velvet. The back of the pillow is also white velvet. It has been embellished with glass pearls, which in addition to white, is my signature. 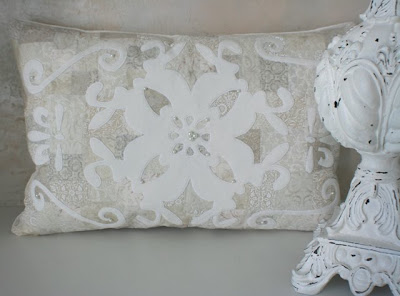 If you would like to purchase this original piece for your home or as a gift, you can go to my Website. Remember, there is only one. "I called it first. No one else can have it."
at July 21, 2010

Absolutely scrumptious, Shell! You do such beautiful work, my friend.
xoxo
Donna

I want to say a big THANK YOU for keeping 'extended family' moments alive. Families are spread far and wide these days it seems so it's wonderful to see the overflowing love of the children and you.

And I totally agree children are so much smarter these days (it seems).

You do such amazing work.....and you are right, it is one of a kind, very beautiful!

What a great ideal Shell and yet another lovely piece.

I am like you, I really like to have what's unqiue...Ikea, etc just don't have the same appeal anymore, espeacially when you look around and see 100 people in the other lines with the same stuff...

It's hard to believe that 6 years ago, in 2014, I launched "Fellowship of the Flowers." This was a year long adventure in whic... 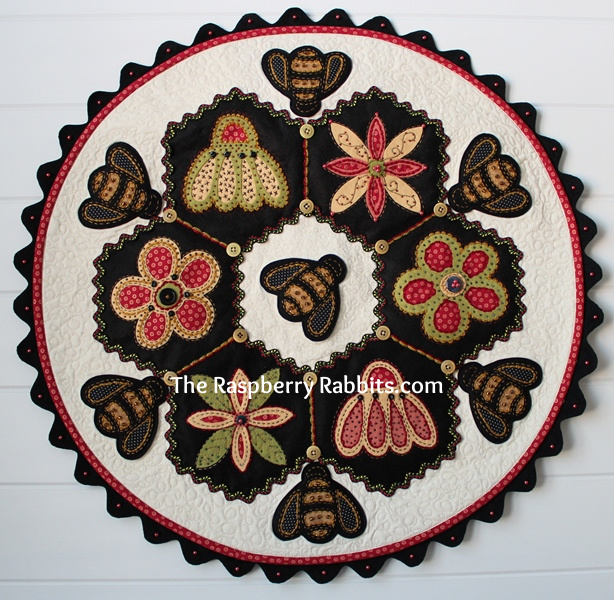